I haven’t been able to get to my usual hunting grounds in Cumbria recently hence the lack of updates. Apart from some experimental, creative photography, (more of which later), I have managed to capture little of interest for the past couple of weeks. Storm Doris kept me indoors last week but having seen the spectacular images people managed to gather from around the country I rather regretted not braving the storms myself

With Storm Ewan forecast to land I decided to man-up and head out with the camera to see what I could image. I headed up to the beacon at Billinge to get a good long view of the storm arriving in the hope that it would produce some dramatic skyscapes. Despite powerfully strong winds, my first few images were of a quite pretty sunset over Liverpool. The pictures obviously don’t convey just how ferocious that wind was. I was clinging on the tripod to keep the camera upright. 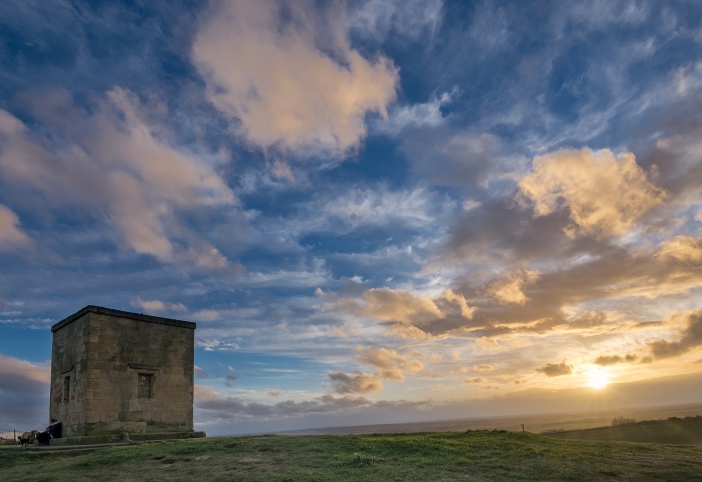 pre-sunset skies at the beacon 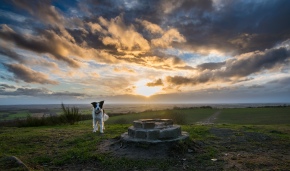 Collie at the Folly! 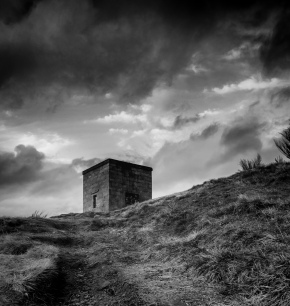 I had my Collie companion with me, and another little dog happened along with its owner for a play. A powerful gust had the little fella off his feet and rolling across the hill. He was up again looking a little bewildered just in time to get blown over again by another blast. Very comical indeed!

Peel Port cranes on the horizon 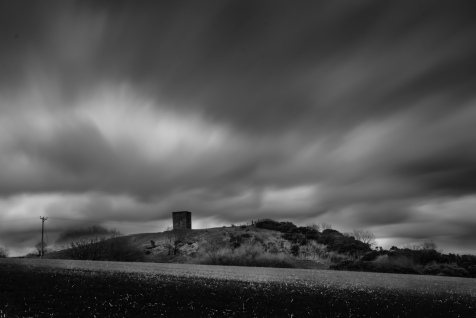 Storm Ewan arrives at the beacon 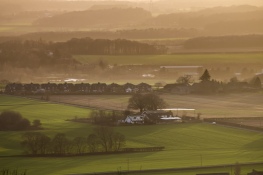 I took a few long shots of the Liverpool skyline which I have stitched into a single panorama. It always amazes me that from up here you can see both Liverpool Cathedrals, St Georges tower and even Anfield football ground. There was time for an image of the village of Crank with the setting sun sending long shadows across the fields before abandoning the summit and heading down the hill to a slightly more sheltered spot.

The clouds had begun to thicken, the light dimmed and the sky took on a moody storm threatened look. From my vantage point beneath the beacon I decided to try a long exposure to capture the dynamic skies and fast changing light. 15 seconds with a 10 stop filter seemed to create the atmosphere I was looking for. With the first few blobs of rain arriving I decided it was time to pack up and scurry away to the van for shelter!

With no majestic sweeping vistas of Lakeland beauty to capture I was getting an itchy shutter finger by the middle of last week. Sometimes you have to create your own photo opportunities though. In this case my  year old daughter had pestered for a packet of glow bands in order to try out an idea she had seen on YouTube. This seemed like an ideal chance for some creative photography! 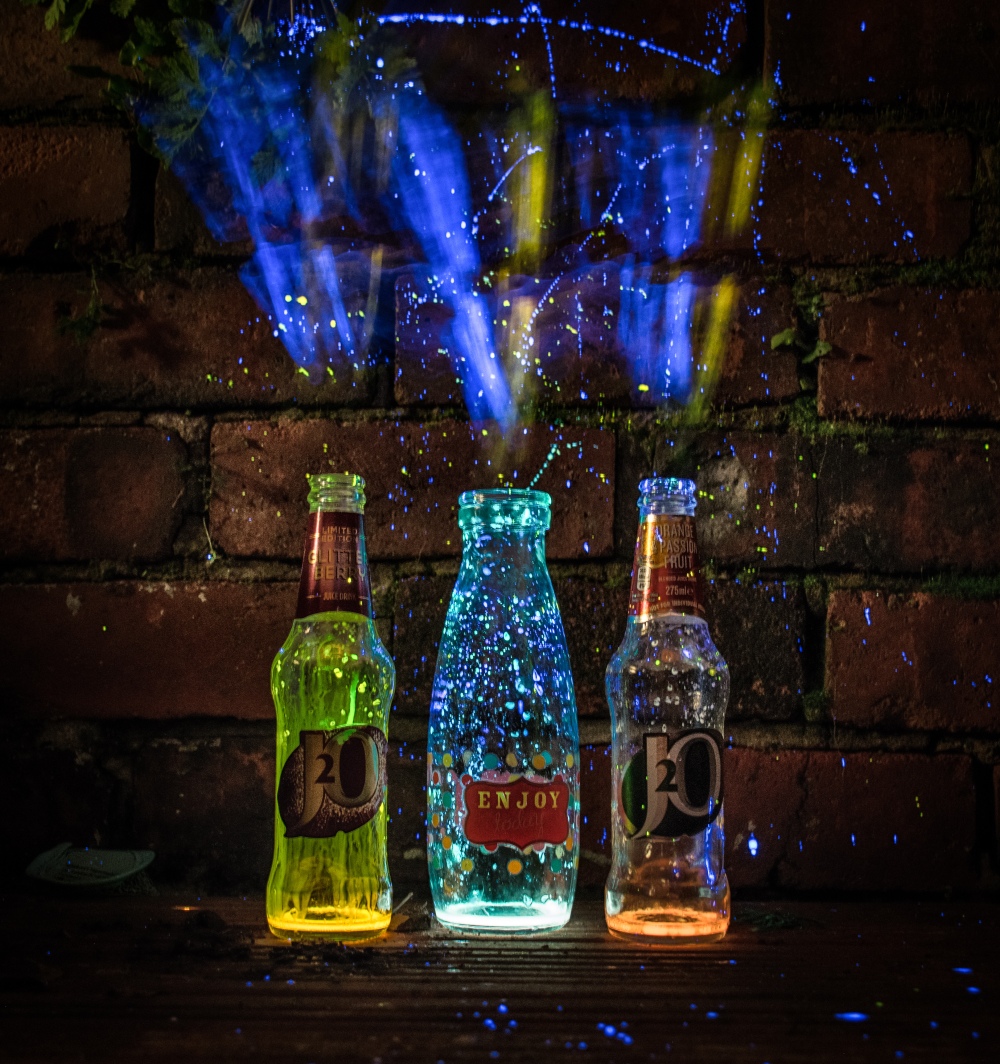 A couple of hours of messing about in the dark produced 2 images that we were quite pleased with. The first involved chopping up a glow band and pouring the probably poisonous contents into a couple of empty drinks bottles and giving them a shake. A spray of luminous liquid on the wall and wiggle of a glow band or two gave the impression of fizzy drinks erupting from the bottle. This was a single long exposure shot image with no post processing trickery to make it happen. Full creative credits to my talented offspring!

Our second production is a sci-fi special. As we don’t have the budget of George Lucas and his ILM team, we had to settle for a light up balloon, a couple more of those glow bands and some patience with long exposures. We call this “that’s no moon!” 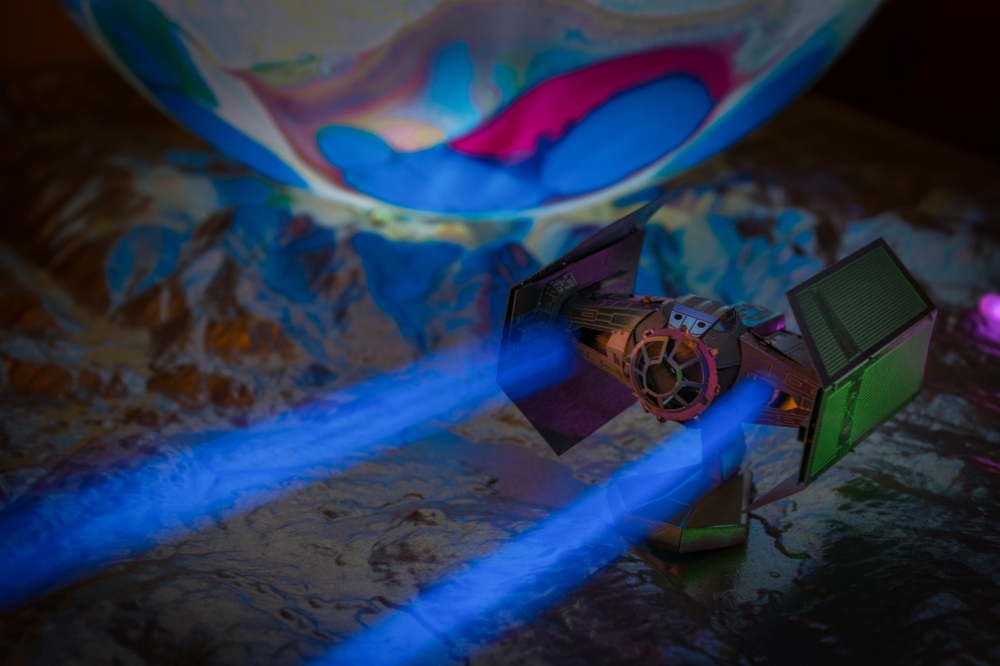 Contact me if you are interested in a print. Prices start at £20 (inc PnP) for an A4 high quality print, but all sizes and formats available.